Ian McKeever and His Process


In an interview in 2013 shot at Galleri Andersson/Sandström in Umeå, Sweden Ian McKeever talks about his process of painting.

He explains that he likes to look at the size of the painting first, maps it out, and once he’s contemplated this for a period he then orders the canvases and begins a series. These are rotated and swapped out as he changes and simply looks at work trying to understanding, painting for periods and then waiting in a state of contemplation. This early stage may well involve paper works or some smaller paintings.

“The painting is establishing its own time, rather than it being imposed.”

He produces large abstract paintings that show a series of layers, with an emphasis on space and form. He’s interested in a “loose amorphous space” that has no exactness but “pulses”. He explains that he is trying to create a feeling for each painting giving it an identity.

One of the systems that he uses is to pour the paint onto the large unprepared canvas surface and he then builds up the layers. He has a level of control but also wants a random element that this brings with it. He uses diluted acrylic paint that cannot be changed or altered and McKeever will destroy one that hasn’t gone as planned.


For McKeever the paintings that he believes works well are the ones which try to deal what it is to be human. He states that too many paintings are about the paint but that there should be more of the painter within the work. He says that he seeks the “The whole philosophy of self” when he paints and looks at other people’s work, that “you are actually trying to declare yourself as a human being and let it manifest it’s self through the form of painting.”

I find this an interesting approach to painting and one I want to try and incorporate into what I do, as yet I’m unsure if this is possible. My work takes form the fake, the artificial recording and the presence of light. Where in this do I exist?

Taking the Orange Landscapes to the Next Stage 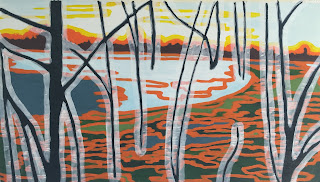 As the experiment that was the flood plain series came to a semi-finished state I began to see other forms within the work. The strong shapes and colours as a whole were strongly competing in the whole space and I could see that there were potential abstract forms and landscapes that I could take further, smaller less combative groups of more abstract sections.

This was a process I did with the field paintings, where I reduced the plant filaments to the abstracted landscapes that I call the Defragmentation Paintings.

Picking out further landscapes in the orange flood plain series resulted in a process that is shown here in this book where I selected sections from the paintings and then zoom in and then rework these in a larger scale.

The size of these newly selected regions of the original paintings I feel is important. I’m currently working at making these larger still.
Posted by Unknown at 18:35 No comments: