Peter Doig on Using Photography in his Work


In May 2015 Martin Gayford writes comprehensively about Peter Doig's latest exhibition and interviews the artist who makes a number of refined comments about his processes, these clarified statements are perhaps more honed then when he previously talked about this subject matter.

Doig talks about the use of photography in painting:

"Photography has been used as a tool for painting for many years. It fed off painting and vice versa."

He acknowledges the heritage of photography in the sense that early work was very much about replicating the style of painting and how the medium of photography was influenced in this way. That now it is used by many painters. He goes on to say:

"But to me it's more interesting when it's not about simply copying, or making photorealism. You see so many people using the photographic world in painting, and I would say that 90 percent of the time it's so mundane. How do you transcend that?"

Doig is saying here that the process of using a photographic image in your work is something of a trap. The ease of simply copying an image can become mundane, potentially predictable. The straight copy of a photo would replicate the photograph and what does this achieve? He's not ruling every such image as mundane more that there is a higher chance of it being so if you do a straight copy. His vision of transcending is the question of how do you escape this? How can you capture more meaning or value in the work when the original photograph has done that already?

He is of course putting himself in this position. His work he is saying could be mundane but he goes on to explain how he escapes this, or tries when he uses photography in his work.

"The photography is an aid really. If I relied totally on my own drawing, my work would be very, very slow and very, very stiff because I'd have to square up."

He is highlighting the convenience of photography and Gayford describes his process as 'subtle and elusive'. Doig goes on to describe some of the finer aspects of the photograph that attracts him:

"Also, in photography, you can sometimes see body language, or a particular silhouette, but to see this in real life would be difficult because it's momentary."

This is what we see in Doig's paints; something captured in a moment. There is no doubt a sense the image is in transition, the people and places caught when they lease expected or the location a scene from the side of a road as you drive by. Some aspects of the shadow are unreal and it's this unreal, although obvious contradictory, aspect of the photo that he seems to be drawn to. He finishes this statement of using photography:

"I'm sure at some time I probably have painted a whole scene from a photograph, but it's very rare. At the moment I'm using just figures, or an element of a face."

Doig looks beyond the frame of the photo and sees it as a place where can extract detail and use it in any way he likes. This is typical Doig who is not afraid to use a vast range of sources for his work. He runs on instinct and produces what Gayford calls a 'complex metamorphosis of the images.'.

The type of mark in my paintings?

From the stills I have put together from my field walks I am painting a none specific mark that is in a sense blurred. I am doing this largely because I am trying to generate movement in the picture as if seeing through the eyes of someone actually there. Hopefully it makes the image more engaging.

This short animated film shows this building of marks as I work on the painting.

Does this currently work how I want it to? I'm not sure if the mark is blurred enough for my liking and will experiment further in the next larger painting.
Posted by Unknown at 15:07 No comments:

In what respect does my work fit into an Altermodern discourse, if at all?


Nickolas Lambrianou in 2009 writes in the journal Mute about the term Altermodern:

"Bourrriaud launches the term via a rebranding of the fourth Tate Triennial for which he is this year's guest curator. But also with a book, a series of events before, during and after the exhibition, and even a manifesto, published on the Tate website."

This highlighting of a manifesto, or set of rules, seems to compound Nicolas Bourrriaud's seriousness and his intention as to establish this as a viable movement.

Lambrianou makes it clear that Bourriaud is using a range of tools to explain this new approach of Altermodernism. But he also goes to great lengths to question whether Altermodernism is actually another Postmodern state. He asks whether the description of Altermodernism is simply a way for contemporary artists to release the shackles of the post modern mantle and the associated confusion.

Lambrianou goes on to describe some of the artwork in the Altermodern Tate exhibition, which demonstrates a very broad range of styles and media, yet the freedom that he mentions at the beginning of the article, as in relations to Altermodernism taking in many international influences, he disregards when talking about painting and says:

"It's as if there is an anxiety about mere painting in itself not been quite Altermodern enough."

This statement is in particular reference to the work of Franz Akermann who's large relief canvases are mixed with architectural constructions some of these potentially clichéd aesthetic touches and for him, on some level, unnecessary. Yet, he suggests that they have been become part of these works because of the Altermodern association.

Lambrianou based upon his exploration of the  altar modern theme sees the stronger pieces in the exhibition that truly represent the supposed new movement as having elements of narrative or a journey from one place to another. In Simon starlings Three White Desks 2008-09 he examines the history of a desk and his relationship to the journey, a work that Lambrianou links to the Altermoden agenda.

He goes on to highlight the narrative within two more works in the exhibition. He seems to suggest the elements of the Altermodern manifest imply an international movement, that the art work in some way has to demonstrate multicultural aspects which for him seem to suggest a narrative.

These narratives are international. If I engage in an international discourse then am I moving closer to the Altermodern agenda and if I remain in one location is my spectrum to narrow to engage with this agenda? It is hard to know at this stage in my work especially seeing painting within the Altermodern landscape seems to be questioned by Lambrianou.


Tom Morton in issue 67 of Freeze Magazine in 2002 calls George Shaw's paintings as "remembered landscapes". Morton describes a gritty environment in which Shaw grew up and how the artist had returned to the haunts of his youth to take photographs during his MA, at the Royal College of Art, in London. These shots became the solid foundation for a series of paintings that were stark in their photorealism, the landscapes grim suburban visas. Morton explains that Shaw describes his paintings like a "headstone marking a memory".

What's apparent with this chosen subject matter is that the photographs Shaw takes, in the first instance, are designed to be used for his paintings. They are images which you wouldn't ordinarily photograph. These locations are off the beaten track places that are functional, or areas of the town in which you might not linger. Some of the buildings he paints are derelict or tagged with graffiti, and they may just be ordinary streets shots from spots you just wouldn't standstill in. They are framed in preparation for the further translation into paint.

Let's not forget these photographs that Shaw prints from are locations from his childhood. Areas that for him already have a visual repertoire and a series of memories attached to them. He is stimulated largely by memory but yet also his informed awareness of a kind of social deprivation that is current is also present in the photographs. For Shaw the relationship between his existence in these locations in the past and what they now mean to him in the future is a powerful one.

There is an absence of people insures paintings, and an air of anticipation or loss. The ceilings are generally run down and you can't help wonder how the subject of the painting manage to get to that situation. Morton in his summary of George Shaw paintings states that he can't help thinking "something terrible is about to happen" when he looks at the paintings and there is a definite sense of foreboding about the work. It doesn't help many of them have grey skies, the palette submerged in grey,  and it appears that it may have just rained, that it's cold and damp and these deliberate subject matters are designed to show the depression of the deprived English suburbs.

Reflecting on Mark Making in My Painting


The very focus of my mark making, in my paintings, has literally been blurred. The images I'm now working from are stills taken from short films that I shot on a digital video camera.  I'm working on board and I'm able to create a smooth brush stroke on the surface and I emphasising the direction of the movement in the picture as I focus on a directional grouping of marks to try and replicate a motion in the image.

The process of working from a printout of the still is also affecting how I interpret the colours and shapes of the landscape. They are removed from the true natural pallette, having been produced by the printer, and are another level through which I am translating reality. 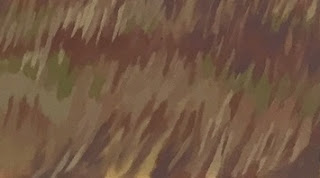 I have purposely worked from a small A6 print and I am finding that this narrows the colours, although these have been manipulated by the printing process, into set areas. It's an abstraction of information into something simpler.

This absence of detail especially in the foreground is as if this is a quick glance at an environment, potentially as the viewer is moving through it. The interpretation seems like a second when the colours are not truly realised, a moment when the lens is adjusting.

Does this take the viewer to the spot or the moment? As yet I'm unsure. It does create action though.
Posted by Unknown at 12:51 No comments: