Method and Reasoning so far in my MA Illustration


Now I am a couple of months into my MA Illustration I am having to carefully study my methodology and what is driving my thought process and ideas. I think the direction of my illustration has had a number of influencing factors so far:

Firstly the media I am using is currently and simply black Indian ink. This is influence by the black wood block prints of Leonard Baskin and their use in illustrating the work of Ted Hughes. They are brutal and primeval and I see these images tapping into something basic in nature, something gritty.

I also enjoy the process of using the ink. I like the emphasis of the line and feel of the quill in the creation, this process an important part of the making. The organic nature of the ink  and it's sometimes unpredictable mark making gives the work a freedom. Yet, there is something exacting about the high contrast and permanent nature of the mark.

Secondly the subject matter has been inspired by nature and poetry written on this topic. Works by Ted Hughes, Emily Dickinson and Lionel George Fogarty - conjure up a range of imagery that I intend on illustrating. Much of what I have drawn so far has featured a range of motifs from the 'Crow' by Ted Hughes, including the crow its self and settings such as fields.

Thirdly I'm driven to understand a process of iconization and simplification that these sometimes pagan symbols, an ancestral interruption of nature, go through. These forms of nature that are symbolic images from history.

Fourthly I intend on trying to represent the collected imagery of a whole poem in one picture, a form of tableau or two dimensional totem. Potentially with the ability to convey a range of ideas or even present some overview or sense of the poems meanings. Each of these tableaus would be large and a work of art in their own right but yet an illustration. This final work would make up a series and as a whole potentially represent the poet's overarching themes.

I am interested in how the motives of the artist illustrator overlap with the work of the poet. Where the boundaries of people's interpretation exist and how together the works sit beside one another and enrich the overall meaning. The story illustrated, the meaning interpreted, a sense communicated?

A Detailed Critical Analysis of The Author/Illustrator by Steve Brodner


The Author/Illustrator is a short text on the current state of the illustrator written in the year 2000 and a forecast of the identity of the Illustrator moving into the new Millennium. It is framed within the context of a series of essays which echo a call to examine the role and place of illustration within society.

Brodner highlights a period, the time of the essay, when computer based graphic design was very much consuming the Illustration industry with quick and cheap alternatives often based around 'Photoshopped collages'. Brodner talks in the first person, the subject matter his own, being an ex-teacher and now a journalistic illustration practitioner  (he emphasises the importance of his practice and his identity as an illustrator). He questions the adaptability of the illustrator and states that he must, and has evolved, to survive in a highly competitive environment.

He presents the premise that illustration is art but that there are some distinguishing features which
characterise, and differentiate, the identity of the illustrator. He goes further to compound that if an illustrator is to retain their identity that they must on some level 'share the mantel of the shaman'. He compares them to poets and composers and talks about embracing your own identity as an illustrator. The key element here being the stories that they tell and the illustrator identifying the narratives that truly drive a 'passion' within them. It's this passion that could realise a style, and polarise its importance, which would be there for all to see.

It seems that Brodner is arguing that illustrators need to take responsibility for interpreting something of society and our age. That they must on some level be contemporary and a interpreter of the current trends and stories that exist in our time, or their own existence. He is saying that an illustrator has a voice and should not merely function as someone who is lead along a path. If this role leads to realisation and a style of interpretation, and therefore some enlightenment, then all the better as this results in a distinct identity.

His argument is based upon this embracing of the a newly realised stance that illustrators could take control of their work by finding a passion in their subject matter. In this way Art Directors will come to an illustrator to tap this 'passion' for the given assignments rather than the artist attempting to fit the required, and already heavily designed, brief. What he proposes is that in the future the illustrator will have greater control of the proposition and that the illustrator will be more exclusive.

Brodner mentions the inclusion of graphic design as a part of illustration but does not go into details. More simple encourages awareness of technique. The emphasis of the essay is no doubt on the role of narrative and story though.

Through his essay Brodner seems to be calling for independence of the illustrator. There is an underlying attempt at reassuring the illustrator by saying that if you can remain true to what inspires you, you will retain your identity in what would appear to be a coming storm. In fact much of this seems to be founded in truth. With the expansion of the online creative arena and growth of websites such as divantart.com and istock there is far more opportunity to disengage the identity of the artist illustrator from their work.

By returning to the beginning of the text we can reflect on some of his motives. He starts by saying that he quit teaching because he had lost sight of his identity as an illustrator and felt he could not explain to his students why or even how to be an illustrator. During the time that the essay was being written the field was changing rapidly and causing uncertainty with the field's practitioners.
The article is one-sided though, because it is a call from his own experiences and is not weighed against other illustrators situation who have succeeded in the new emerging divergent fields of illustration. Although he is talking from a place of eventual career success and experience.

At the time there was a great fear that the discipline of illustration was being outshone by new technology, as previously stated. It's this identity crisis that he chooses to explore through his own experiences and then tries to reiterate his own identity and a place where he himself has succeeded, but also feels rewarded.

Brodner argues that 'self-generated projects' will lead to independence and with the current environment of 2015 it seems like a prophecy well foretold. Within a contemporary market we see independent illustrators and artists emerging with their own brands and styles who are utilising self publishing and websites that allow for their work to be branded on to merchandise.  There is an increasing number of locations where illustrators are able to show their wares and gain independence.

Is this a bad thing? Potentially, yes as the choice of work is massive but how many of these illustrators follow Brodner's principles? How self generated are the presented works and how close are they to their passions? On what level do we see an emerging style within illustration that has been sculpted by the demands of the market and how much pressure does the market put upon these often young practitioners to produce work that mirrors other work? It is difficult to tell at this stage what effect this has had on the market but potentially Brodner's call for independence is well argued.

Ultimately Brodner is saying be true to yourself and identify the illustrator within, a stance he himself has taken, in what he perceives as an increasing competitive illustration sector. He quotes Ansel Adams in the last paragraph; "When truth is the goal your work can not but partake of truth." He sees this as the goal and reward, although this for some will be unachievable as the goal for many is unknown. But it seems that through this text Brodner has made his own journey and found his own truth. Potentially his argument here in this essay could lead many illustrators to success. 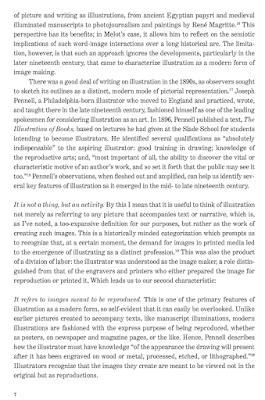