The drawing workshop run by Kerry Andrews on the 9th of December, at the University of Hertfordshire, which was titled "Drawing from the Ground Up" had a focus on working from a mid tone, a worked surface or prepared ground. Before the practical we looked at some ideas about drawing and especially the conception of the process.

Kerry talked about Alexander Cozens (1717–1786) and his "new method of assisting the invention in the composition of landscape". This was a starting point where Cozens talks about the use of prepared surfaces and translating something there within the marks. In a sense the start has already happened and that you then continue on top.

By having an image, texture or series of marks to work from something could be sought within the surface. Potentially the image would be unknown or there may be a gesture seen within the ground that gives direction. This could take the form of an 'atmosphere' something darker or lighter, intense of moving. 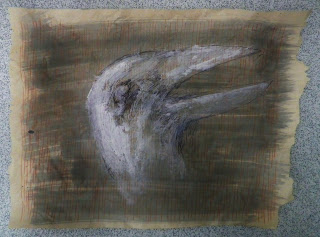 I used a series of brown vertical lines on a mid tone, washed with a diluted ink, as a back drop to the image of the crow. I had also scrunched up the paper and flattened it again to introduce a chaotic network of creases. Then I drew the crow's head in Indian ink and  highlighted it with white paint creating a greater range of contrasts and a 'lived in drama'. What I mean by this is the crow looks like it's in a three dimensional world, that something is going on behind it and that it potentially lives in a drama, which could be the poem I am illustrating. 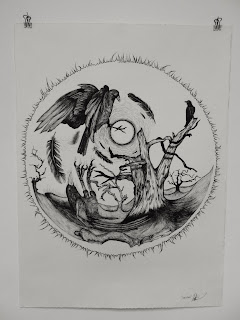 The process it's self is contrasting to the style I have adopted so far where the images and icons I created are stark against the paper. Each aspect of the work has been driven by some part of the story. I took symbols from the poem and worked them up individually and then combined them. As can be seen here and aspects of the story are evident but does it give the feeling of the meaning behind the words or is it a literal translation of parts of the story to try and make a collective whole? Does the single image of the crow's head, drawn in the workshop with its distinctive background and use of paint, tell us more about the story of the poem? Which feels more like the poem? These are some of the things I need to consider as I move forward.