Examining the opening Prepace of Alan Male’s “Illustration: A theoretical and Contextual Perspective”


The preface to Alan Male’s “Illustration: A theoretical and Contextual Perspective” leads with “Illustration: a definition. Applied Imagery; a ‘working art’ that visually communicates context to
audience.”

It seems like a straight forward approach to start with the dictionary definition but in the delicate understanding of what something actually is it can throw up more questions than answers. What is a working art? What is applied imagery? And what is the context being communicated to the audience? This could be a context of understanding, but realistically this would be many contexts, every situation a bridge between numerous perceived cultural contexts or situations. Also is the assumption that it is a context which is communicated visually? 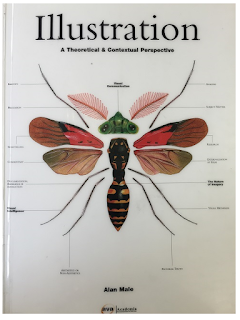 Potential the word ‘narrative’ could exist within the canon the words that classify illustration. To illustrate is to tell? Is the definition of Illustration illusive or does it even exist? Alan Male says in his preface, “Illustration can also be applied to anything and is not driven purely by fad or trend.” This implies that Illustration can indeed take on the disguise of ‘anything’ it likes, as if it floats freely absorbing a range of cultural and technological tools for its own use.

But it seems that Alan Male is concerned that this appropriation can be seen as devaluing the basis of Illustration when he says, “The notion of illustrator as ‘colouring-in technician’ must be discarded!” This for me says that the identity of Illustration is open for debate in many discussions and potentially revealed an underlying worry in Male’s mind about the credibility of Illustration as its own unique and valued art practice. How can we discerned illustration?